SEUK have recently published the press release with further info about Wigan and the award:

Wigan has a population of around 350K.  The towns and villages grew around the coal mining and mill industries, a heritage which the town continues to celebrate.  Wigan boasts excellent transport links which allows many residents to commute to jobs in other North West towns and cities and around two-thirds of the borough is expansive countryside and boasts stunning parks, woodlands, wetlands, canals and green spaces.

Like many northern towns, Wigan has areas that suffer from deprivation and 29% of the population lives in areas that are amongst the top 20% most deprived in England. This has led to a growth in social enterprises, setting up to support disadvantaged groups and to meet the needs of the communities where they are located.

A survey carried out in 2020 identified c650 Social Enterprises operating across Wigan Borough. These range greatly in size, with income levels of less than £1000, up to around £24m.  The study showed that the sector was worth 2.9% of the local economy in 2018 compared to a national average of 0.9%, outlining the strength of the sector in Wigan.

A focus on Social Services, Arts and Culture and Sports and Social accounts for a large percentage of the SE Sector, with Education and Religious Associations prevalent.

The Sector benefits from strong support networks both regionally and nationally and recent initiatives, including the process of gaining SE Place Status has grown the appetite for a formal Boroughwide SE Network.  The local council have worked closely with the SE Sector to help develop and deliver The Deal, a local strategy aimed at making Wigan Borough a better place for all residents.

You can read the full press release by clicking here. 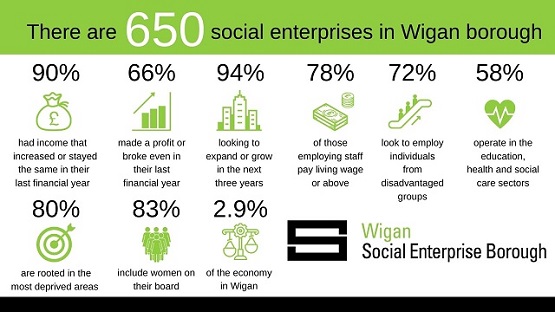